Men of the Gun 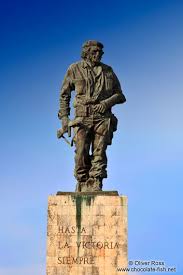 The Memorial to Che Guevara in Santa Clara about a four hour drive from Havana features a huge 50 foot tall statue of the famed guerilla leader in his fatigues holding an M-1 carbine in his left hand below his belt line.

Early pictures of Castro always show him with his pistol on his side. Revolutionary leaders seem to always pose with their guns. Arafat was known for his pistols. He was the only one allowed to carry his sidearm into the sacred halls of the United Nations.

Osama Bin Laden is commonly shown reading his speeches with AK-47s leaning against the wall nearby.

These leaders are making the statement that only violence can succeed in achieving their perverted aims of justice. They pose with their guns so much that the guns are a key defining part of their identity.

But it is striking that the academic left that so idolizes these revolutionary leaders that define themselves by the guns at their side are also likely to oppose the opportunity for gun ownership for the average citizen. Che is honored more than Ghandi who felled the British control of India without ever brandishing a firearm.

Che Guevara, the hero of the Cuban revolution, was also know for his brutality in executing the soldiers of Batista, the Cuban dictator who fled with his bodyguards and suitcases of cash to live the remainder of his life of the coast of Spain.

Given the injustice and brutality of Batista it is not surprising that his victims would have sought revenge against his soldiers.

While these revolutionaries claim to fight for justice, they saw the need to enforce their justice with a gun. Liberal support for these tyrants lasted well into their reigns that killed and starved millions.

Our leaders are not posed in the historical photo archives with guns. We use them when we need and then we put them away. We do not define ourselves by our guns.
Those who rise to power as men of the gun have the most to fear from an armed population.

print
The Freedom to be Left Alone
Intellectual Blindness