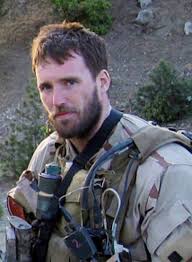 Marcus Luttrell of Seal Team 10 was with 3 other Seals on Operation Redwing in the Hindu Kush of Afghanistan searching for Ben Sharmak, a high level Al Qaeda operative in a Taliban stronghold .

Navy Seals are the toughest of the toughest. You have be tremendously fit to even be considered for training and only 1 in 5 make it through the final training. They are crossed trained in every area of combat known.

Luttrell and Mickey, Danny and Axe are observing a village looking for their target; they are hidden motionless when a goat herder, his two sons and a bunch of goats walk upon their position. They face three unarmed civilians. If they kill them they violate the rules of engagement; if they let them go they risk that they will bring hords of the Taliban upong them. After serious arguments the team lets them go, but Marcus knew it was a serious mistake.

Hours later the four Navy Seals are engaged in a horrific gun battle, surrounded by over a hundred vicious angry Taliban. The battle rages for hours, they retreat, slide and fall down steep mountainous rocky terrain. Marcus’ three buddies are killed, but not until they have been hit repeatedly with bullets and RPGs. They probably took out half of the Taliban force around them.

A rescue team is dispatched during the fire fight with 16 soldiers including 8 Navy Seals. A shoulder fired missile destroys the MH-47 Chinook helicopter with every one on board.

Marcus survives with fractured vertbrae from the fall, shrapnel in his leg and a bullet wound. An Afghan villager helps him and protects him from the Taliban who are searching for him. He is eventually found by a Army Ranger search party and returned to base to fight again. He lost 30 pounds in 6 days.

His story is in “Lone Survivor”, a gripping tale.

The rules of engagement cost 19 of the best warriors we have and probably 100 Taliban fighters. It was the worst special ops loss we have ever faced. Each one of these Seals is more valuable from a purely military perspective that a billion dollar plane.

It is difficult to restrict our soldiers when we are fighting an enemy who knows no rules and has no compassion for anyone other than their distorted pathological followers.

print
Check Your Brains at the Potomac
True Character Emerges