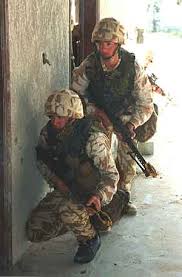 The greater the military’s ability to isolate combatants, the longer the war will last. Israel and the United States have developed incredible precision to take out enemy combatants while sparing civilian lives. This is the result of the higher moral code these armies operate under and the reality of fighting movements instead of countries.

Yet in wars past they ended from exhaustion not just defeat on the field of battle. In WWII we won as much from economic superiority as from military courage. We were just able to outlast the enemy and replace tanks and planes faster than they could.

The more the civilians are protected from the consequences of the combatants they harbor, the less likely they will surrender and turn against their parasitic vipers, and the longer the conflict will last.

The greater the presence of the media (in western cultures) to report on military engagements, the more brutal they will become.

The longer a war rages on, the greater the chance that the press will report on the flawed strategies, civilian casualties, and inevitable brutal tactics. This weakens civilian support and increases political posturing.

The result is the military will take to using overwhelming force to win the war quickly. The military knows but will relearn anyhow that “short term ferocity saves lives” and that “victory forgives”.