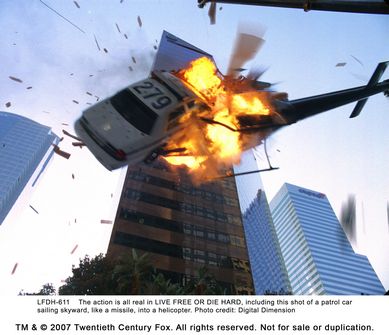 Growing up in the scrap business we see the world a little different. Occasionally I will judge movies by how much scrap metal was generated in the story.

The 4th in the Bruce Willis Die Hard Collection is “Live Free or Die Hard”, a slam dunk 5 star plus (out of 5) on the Scrap Movie Review scale. Massive car wrecks, plane and helicopter wrecks, highway and bridge destruction (lots of embedded steel) and the ultimate total destruction of a huge power plant that alone must have been worth at least a 50,000 ton demolition. It was enough to make a scrappie shed a tear of joy.

From the actual script side they did not muddy the action with irrelevant love plots, international intrigue or political commentary; the destruction was not the result of humiliated Muslim fanatics, but just a pissed off high level ex- government employee… and a whole lot of burning, exploding, crashing, tearing action filled generation of first rate scrap metal.

The only other Scrap Movie Review 5 Star ratings I have recently bestowed were on Independence Day and War of the World, but both of these science fiction scrap fests involved aliens and substances (those 15 mile wide space ships) that probably were made of some alien material that would have been difficult to find an aftermarket for and would have generated just ridiculous disposal costs; a scrappie nightmare.

HKO
print
Time to Fix Their Own Mess
The Information Trap